When a breast glandular duct cell transforms into a malignant cell many things need to go wrong. Firstly, the duct cell needs to change its normal behavior and start dividing rapidly, but the cell also needs to survive. Most cells that transform at an abnormally high rate are disrupted by programmed cell death, called apoptosis. This programmed cell death does not occur in cancer cells however.

The wild, rapidly dividing cell, starts multiplying. The entire gland tube is filled with malignant cells and the lumen of the tube then disappears. As long as the cancer cells do not break through the wall or basal membrane of the duct, we refer to this cancer as a ‘carcinoma in situ’.

This is a non-invasive tumor with a good prognosis. The fact that the cells do not cross the wall of the basal membrane is crucial. The blood vessels and lymphatic vessels are located in the connective tissue around the gland tubes. As long as the cancer cells do not cross the basal membrane or wall of the gland tube, the cells cannot spread to other organs. The complete removal of a carcinoma in situ therefore guarantees a 100% cure.

Most non-invasive breast cancers do show an increased risk of developing an invasive component. It is therefore imperative that these non-invasive cancers are detected early and treated properly.

Once the cancer cells migrate through the basal membrane the cancer is called an invasive tumor. From now on the malignant cells can reach the blood and lymph vessels. The cells will form a mass outside the ducts that modifies the normal connective tissue distribution.

On examination of the breast a hard and immobile mass is felt. A malignant tumor is usually not painful. The tumor cells can migrate through the lymphatic vessels to the lymph nodes of the armpit or other areas around the chest. In patients with an invasive tumor, the sentinel node or the lower part of the axillary lymph nodes are removed during surgery and examined for metastases.

DCIS is often diagnosed as microcalcification on mammography. DCIS is a precursor of invasive carcinoma and should always be fully removed. There are different degrees of aggressiveness, depending on:

LCIS is usually not palpable or visible on mammography. It is often an incidental finding in tissue removed for a different reason. LCIS is usually present in multiple places within the same breast and also both breasts may be affected. If LCIS is present, the risk of developing an invasive cancer is approximately 37%.

The cells of invasive cancers have the ability to invade and penetrate the surrounding tissues and can produce distant metastases in lymph nodes or other organs. The most frequent types are: 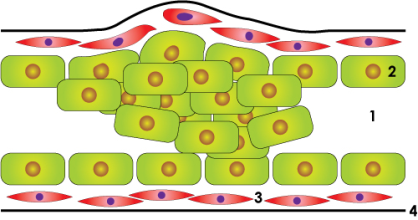 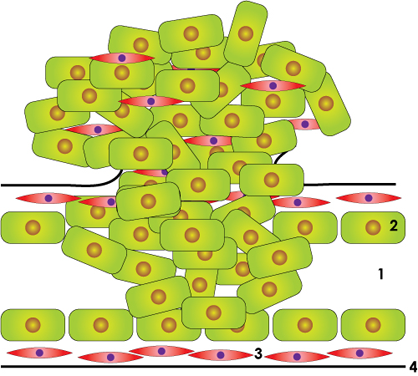 Paget’s disease of the breast is a malignant condition that may have the appearance of eczema of the nipple, with skin changes involving the nipple and sometimes the skin of the breast. Since the condition in itself is often innocuous and limited to a surface appearance, it is sometimes dismissed, although actually indicative of a serious underlying cancerous condition. 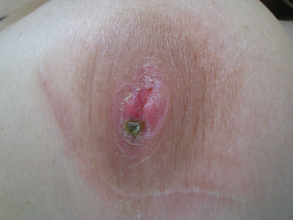 Figure above: Paget's disease of the breast