Suzy requests a medical consultation because of her concerns about the incidence of breast cancer in her family. She is 27 years old and otherwise fit and healthy.

A family tree (Figure) shows that a large number of Suzy’s father’s relatives developed breast cancer at a young age; Aunt Linda at 38 years of age and Suzy’s grandmother died from the same tumor when she was 42 years of age.

Suzy’s grandmother’s two older sisters were also diagnosed with breast cancer: one at 65 years of age, whilst the other sister developed bilateral disease, initially at 45 and then again at 51 years of age. Two of Suzy’s father’s five cousins also developed early breast cancer. 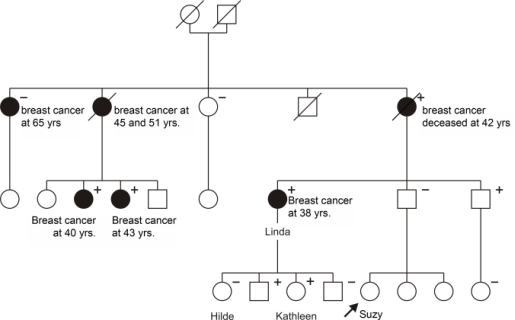 In this particular family, many of the female relatives developed breast cancer at an early age: there is therefore a significant chance that there is a heredity component to their breast cancer.

A genetic abnormality was identified in Aunt Linda’s BRCA-1 gene. Further investigation also showed several other relatives, both male and female, to be carriers of this genetic mutation (indicated by a ‘+’ sign). Some of the relatives had already developed breast cancer (diagnostic test) whilst others were as yet unaffected (screening test).

In a number of the relatives, the genetic mutation was absent (indicated by a ‘-’ sign). In particular, Suzy’s grandmother’s eldest sister, who developed breast cancer at 65 years of age, was shown to not be a carrier. She has what is known as a “phenocopy”.

Suzy confirms during the consultation that there is a high likelihood of a heredity component to her family’s breast cancer. Further genetic research is required but Suzy is surprised that a blood test is not performed immediately.

The doctor explains that when genetic research is undertaken, the investigation begins with an individual who has already developed cancer because the chances of finding the genetic mutation are highest.

Prior to the consultation, Suzy had already discussed the possibility of genetic testing with Aunt Linda, who responded favorably. Suzy therefore decides to make a joint appointment at the genetic clinic, to begin testing.

At this appointment, Aunt Linda receives comprehensive information about the details of genetic testing. Her motivation to become involved is also explored. It transpires that Aunt Linda had already considered a consultation, before Suzy’s request, explaining her warm response.

Aunt Linda has also openly discussed genetic testing with her own children. She is however concerned and uncomfortable about the potential consequences of a positive result, especially given the fact that her children may have inherited the affected gene. In particular, her eldest daughter Hilde has just recovered from a major depressive episode and this may not be the ideal time for her to be involved.

Before a blood sample is taken, Aunt Linda signs a consent form verifying that she fully understands the implications of a positive result. Aunt Linda is disappointed that the analysis will take six months, but after the doctor explains the complexities of the molecular test, she understands.

Six months later, Aunt Linda receives a letter confirming that the genetic investigation has been completed and that a consultation has been arranged to discuss the results. Aunt Linda and Suzy agree to go to this appointment together.

At the genetic clinic Aunt Linda and Suzy are told that, as suspected, a mutation in the BRCA1 gene has been identified. Although shocked by the news, Aunt Linda had already prepared for this eventuality; in conjunction with her oncologist, she has decided to have prophylactic removal of both ovaries but not her breasts, in the event of a positive result. Although frightened by the thought of developing a breast tumor, Aunt Linda finds the thought of removing both her breasts too daunting and has therefore opted for close oncological follow-up, in an attempt to keep the risk of breast cancer as low as possible.

Suzy expects a blood test immediately, to confirm whether or not she is also a carrier. The doctor however explains that it would be better to first test her father, as he has 50% chance of being a carrier. If Suzy’s father has not inherited the mutation, then there is no need to test the remainder of his family.

Suzy is disappointed, but the possibility that her father may not be carrier, is a comforting thought. She is also pleased to hear that her father’s investigation will take much less time, now that the mutation in the BRCA1 gene has been identified.

Suzy’s father is given an appointment within four weeks of his genetic testing to discuss the results. He and Suzy are delighted to learn that he is not a carrier. This means that Suzy and her sisters have not inherited the BRCA1 mutation and that their risk of breast cancer is no higher than that of other women of a similar age. Suzy will therefore begin routine mammographic screening, at 50 years of age.

Aunt Linda’s eldest daughter, Hilde is not sure if she wants to undergo genetic testing. She doubts whether she could cope with a positive result and decides to defer the investigation.

On the other hand, Aunt Linda’s youngest daughter, Kathleen, is convinced that she wants to proceed. She makes an appointment at the genetic clinic and receives all the necessary information. She is also seen by a psychologist who explores her reasons for testing and discusses the effects of a positive result.

Kathleen has decided that if she is a carrier, she will have prophylactic mastectomies and bilateral immediate breast reconstruction. She does not wish to have her ovaries removed, principally because she is so young. The risk that she may develop breast cancer terrifies her more: she saw the effect of the chemotherapy on her mother and wants to avoid this at all cost. Kathleen’s children are also an important factor in her decision, she wants to be there as they grow up and that is her main motivation for undergoing risk reducing surgery.

Kathleen returns to the clinic 4 weeks later to find out her results. Unfortunately, the investigation confirms that she has inherited the mutation from her mother. After the initial shock, Kathleen quickly regains control and draws strength from the choices that the result affords. She also finds it reassuring that she can always come back to the clinic, the doctor or the psychologist if she needs additional medical information or is having difficulty coping.

In the following months there is discussion about the entire family submitting to the genetic testing. Some relatives, however, do not want the investigation, whilst others, both male and female members, would prefer to know and schedule a consultation. Hilde also finally reaches a decision. Completion of the investigation confirms that she is not a carrier. Hilde is relieved, but feels a sense of guilt towards her sister Kathleen.