Women who have inherited mutations in the BRCA1 or BRCA2 genes have substantially increased risks of breast and ovarian cancer. Mutation carriers have various options, including extensive and regular surveillance, risk-reducing surgery and chemoprevention.

The first option is surveillance (breast self-examination, clinical breast examination, screening using mammography and breast magnetic resonance imaging (MRI), trans-vaginal ultrasound scanning and blood levels of CA125). This concept is based on early detection of cancer rather than cancer prevention. Undoubtedly, surveillance is the least invasive option; however, it is associated with various negative consequences, such as increased anxiety, false reassurance and unnecessary biopsies.

Risk-reducing surgery in BRCA1/2 gene mutation carriers includes prophylactic bilateral salpingo-oophorectomy (BSO, removal of the ovaries and fallopian tubes) and/or prophylactic bilateral mastectomy. The aim of surgery is to reduce the risk of cancer development and to reduce mortality. In a large, retrospective analysis of BRCA carriers, BSO was found to have reduced the risk of ovarian cancer by 96% and breast cancer by 53% at a mean follow-up of 9 years. The potential benefit of surgical prophylaxis however has to be weighed against the risk of surgical complications and the impact of mastectomy or oophorectomy on a woman’s self-image and their sexual and reproductive function.

The final option is chemoprevention. It is well recognised that oestrogen plays an essential role in breast cancer development by exerting a carcinogenic effect. Therefore, targeting oestrogen synthesis with anti-oestrogen medication aims to reduce this risk. Currently there are few studies investigating the use of chemoprevention in BRCA1 or BRCA2 mutation carriers and this option remains relatively controversial. Only in women who have already developed breast cancer has Tamoxifen been shown to reduce the risk of developing a new tumour by approximately 50%. Chemoprevention may however have a role for asymptomatic mutation carriers in the future.

Choosing between these different risk-reducing strategies is a complex process involving both personal choice and medical opinion. Important personal factors include the anxiety associated with developing a cancer, the desire to have a family, one’s sexuality and its effect on relationships and any previous experience with cancer in the family. There is also no medical consensus on the benefits of risk-reducing strategies.

The optimal frequency of screening for both breast and for ovarian cancer remains uncertain. Although we know that Magnetic Resonance (MRI) can detect breast cancer at early stage, the role of MRI screening in BRCA1 and BRCA2 gene carriers is controversial. There is currently insufficient data on the improvement in life expectancy offered by the different risk-reducing strategies. For example, although surgery can reduce the chance of developing breast cancer, it is unknown whether this, in comparison to intensive screening, actually results in a better overall survival. Also, the effect of temporary hormonal substitution after prophylactic removal of the ovaries is unclear, because there are fears that the risk of developing breast cancer would rise again.

Therefore when considering the different options, there is no single “best” choice. It is vital that each patient finds a solution that she is most comfortable with. For some, this is risk-reducing surgery, whilst for others regular clinical examination offers the most reassurance. In addition, meeting other affected patients can be helpful.
A support group for people with hereditary breast or ovarian cancer has recently been established in Belgium, Natarelle (http://www.natarelle.be).

For male carriers of the BRCA1 or BRCA2 mutation, screening is recommended for the early detection of colon and prostate cancer and skin tumors (Table) 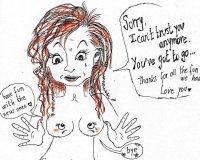