During surgery for removal of a malignant breast tumor, it is also possible to evaluate the axillary lymph nodes for the presence or absence of loco-regional metastasis from the breast. The aim of this procedure is to determine the severity and extent of the disease. Based on the involvement of axillary nodes, additional (adjuvant) therapies will be arranged, including chemotherapy, radiotherapy, immunotherapy and / or hormonal therapy. If large or invasive tumors or multiple small invasive breast tumors are present, all the nodes in the lower part of the axilla are removed.
Previously, more aggressive surgery was undertaken i.e. removal of all the lymph nodes around the blood vessels and nerves of the arm and behind the clavicle (axillary clearance) but this appeared only to cause more complications without giving any additional information.

The major complications were lymphedema and chronic nerve pain in the arm. Lymphedema (inability to drain lymphatic fluid resulting in its accumulation in the affected limb) is still the most frequent complication of axillary surgery but is less frequent with more conservative measures. The risk of lymphedema is increased when radiation is administered to the axilla. 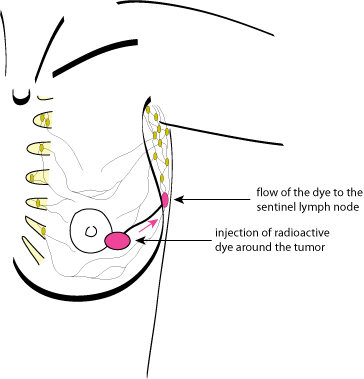 During surgery, a sensitive device (Geiger counter) that measures radioactivity, is used to detect the sentinel node. This is then excised and sent for histological examination. If the sentinel node is free of malignant cells, it is not necessary to remove the other lymph nodes in the axilla. A sentinel node biopsy is a minimally invasive, short procedure. Side effects, including the risk of lymphedema, are minimal.

If the sentinel node is invaded by malignant cells, a conventional removal or “clearance” of the lower part of the axillary lymph nodes is performed in an additional surgical procedure (fig. 2). 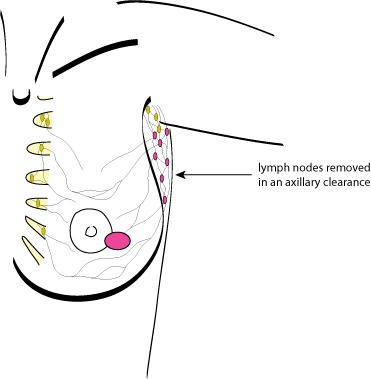