Women with a significant risk of breast cancer frequently have multiple first degree relatives affected by the disease at an early age or have one or more relatives with multifocal or bilateral breast cancer.

These women also often have a family history of ovarian cancer and male relatives affected by breast cancer. In these families, the genetic predisposition is the result of inheriting a specific genetic abnormality, involving a mutation of the BRCA1, BRCA2 or BRCA3 gene.

breast cancer in at least 2 first or second degree relatives at an early age, without fulfilling the criteria for hereditary breast and ovarian cancer syndrome.

In families where the risk of breast cancer is moderately or just slightly increased, the relationship between affected family members is more distant and the age of diagnosis later. These are examples of familial breast cancers (Table).

In a minority of these families, genetic abnormalities in the BRCA1, BRCA2 or BRCA3 genes are identified but other genetic ‘variations’ may also play a role. These variations have a weaker influence on the risk of developing breast cancer but are probably occur more frequently than the BRCA1, 2 or 3 mutations and may have a greater impact on the general population. There is also the real possibility that the effect of these variants is influenced by non-genetic factors.

Unfortunately, it is not currently possible to perform a molecular analysis for these genome mutations. The risk for unaffected family members has to be calculated based on information obtained by analyzing the family tree.

It may in fact be difficult to distinguish between hereditary and familial forms of breast cancer. The contribution of genetic mutations is best regarded as a continuum: in familial breast cancer genetic abnormalities play a minor role in the risk of breast cancer, whereas in hereditary forms, BRCA1, BRCA2 and BRCA3 mutations have a significant impact. Many families, however, find themselves caught at the boundary between these two entities. 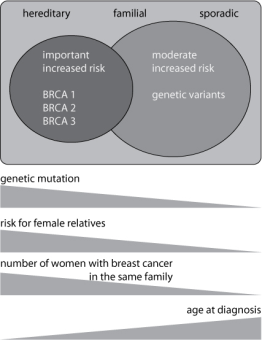 Figure A
Figure: A Family history of breast cancer helps divide patients into three overlapping categories: sporadic, familial and hereditary. An early age of diagnosis and a large number of affected family members increases the likelihood of the hereditary form.

Genetic abnormalities (mutations in the BRCA1, BRCA2 and BRCA3 genes) are most frequently demonstrated in the hereditary form. These genetic defects cause an increased risk of breast and ovarian cancer in female carriers. In familial breast cancer, genetic mutations have less influence on risk.