A mastectomy should be performed when:

Even less radical surgery can be offered to patients, depending on their tumor: 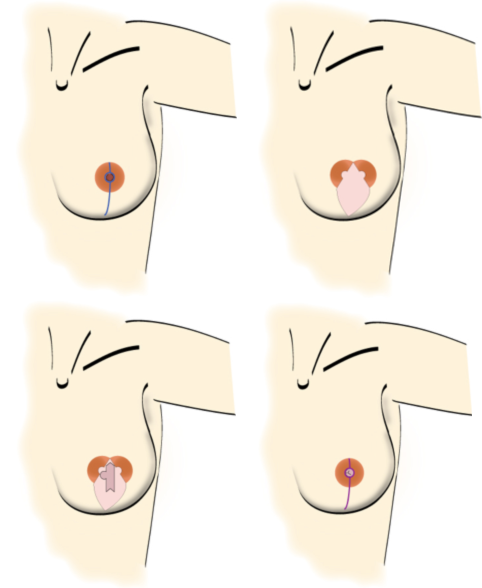 fig.1: Steps in an areola-sparing mastectomy. (a) skin incision for an areola-sparing mastectomy, splitting the areola into two halves and extending to about 1 cm above the inframammary fold; the nipple will be removed. (b) an elliptical skin island of the free flap is fit within the mastectomy skin edges. (c) this skin is used in the second procedure to reconstruct the nipple by means of a modified C-V flap technique. (d) after removal of redundant free flap skin, the wound edges are closed to restore the round shape of the areola and finish with a vertical infra-areolar scar. The new nipple still needs to be pigmented by tattooing during a short third session.

Depending on the patients’ wishes and the breast size and shape, a skin-sparing mastectomy can be combined with either reduction of the skin envelope or a breast lift procedure.

To achieve the best aesthetic result in an immediate reconstruction, it is important to preserve the inframammary fold, the pectoral muscles and the skin envelope during the mastectomy. If any of these anatomical structures are disrupted, they should be repaired before introducing an implant or autologous tissue.

In particular, if there is a deficiency in the skin envelope, then this needs to be addressed. In an immediate autologous reconstruction, the skin can be replaced with skin from the flap. In the case of implant based reconstruction, the extra skin has to be recruited by gradual tissue expansion.

When a patient presents requesting a delayed breast reconstruction, the surgeon has to assess the level of post-ablative damage and the effect of any previous radiotherapy on the chest wall. The more aggressive the initial ablative surgery, the higher the dose of radiotherapy administered (or sensitivity to the radiotherapy), the higher number and type of previous reconstructive attempts and the absence of the nipple-areolar complex, all make the reconstructive procedure more complex and adversely influence the final result.

Examples of different types of mastectomies:

Figure above: schematic drawing and clinical example of a patient who has undergone a modified radical mastectomy without reconstruction.

Figure above: schematic drawing and clinical example of a patient after a skin sparing mastectomy and an immediate autologous breast reconstruction. A nipple reconstruction still needs to be performed.

Figure above: schematic drawing and clinical example of a patient who underwent an areola-sparing mastectomy and an immediate autologous breast reconstruction.

Figure above: schematic drawing and photograph of the same patient as figure 3 after nipple reconstruction and tattoo of the nipple-areolar complex.

Figure above: schematic drawing and clinical example of a patient who underwent a subcutaneous mastectomy through an infra-mammary incision. She underwent a delayed autologous breast reconstruction through the same incision in a 2nd operative procedure.