Occasionally, redundant tissue is present close to the breast, on the flank. This tissue, consisting of the skin and underlying fat, is supplied by blood vessels called intercostal perforators (Fig.1). Similar to to the ThoracoDorsal Artery Perforator (TDAP) flap, an elliptical skin island can be harvested on these small vessels, known as the Lateral Intercostal Artery Perforator (LICAP) flap. This tissue can then be rotated into an adjacent breast defect, using its vessels as a pivot point, without the need for microsurgery.

The LICAP flap leaves a horizontal scar on the flank and back. This scar can be completely hidden underneath the bra and arm and is often inconspicuous. The LICAP flap has similar advantages and disadvantages to the TDAP flap. However, only patients with tissue available on their flanks are going to be suitable for this technique and only minor defects on the lower, lateral part of the breast can be filled. 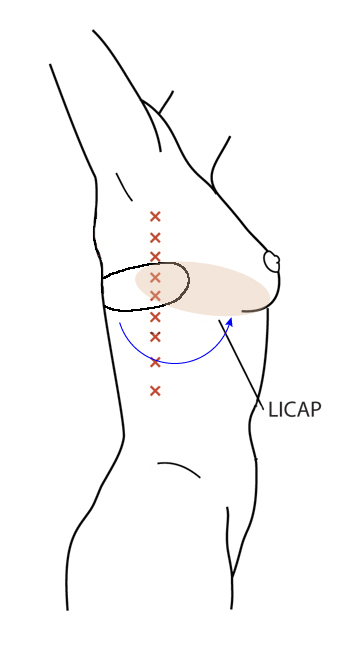 Fig. 1: The LICAP flap: the lateral intercostal perforators lie on a line in the axilla (red crosses). Based on one or two of these vessels, an island of skin and fat from the flank and/or back can be raised. The flap is then rotated through 180 °, pivoting on these arteries, to reach the breast defect.

Fig. 2: (a) Pre-operative picture of a right breast with a depression and lack of volume. (b,c) Post-operative picture after transferring the LICAP flap from the right flank. The shape and volume of the breast are restored, leaving a horizontal scar within the bra-line.