The lower abdomen represents the major donor site for autologous breast reconstruction. However, this source of tissue can sometimes be limited, for example, if a patient is very thin or there is extensive scarring of the anterior abdominal wall. In these circumstances, the buttock offers a valuable alternative.

The microsurgical transfer of a gluteal myocutaneous flap for breast reconstruction was first described by Fujino et al in 1975. Despite initial enthusiasm, this flap was plagued by a difficult dissection, short vascular pedicle and significant donor site morbidity. The advent of perforator flaps in the early 1990s marked a major technical improvement.

As a result, the SGAP flap is our preferred choice for autologous breast reconstruction after the DIEAP flap.

Gluteal perforator flaps can be shaped into an excellent three dimensional breast (fig. 4e). The surgery moderately raises the buttock and leaves a diagonal scar, though this is covered when wearing underwear or a bikini (fig. 4f). 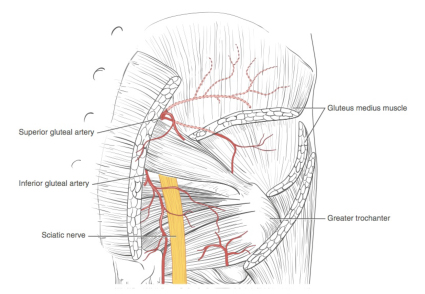 Fig. 4: Schematic representation of the SGAP procedure: (a) location of the skin paddle over the vessels, (b) splitting of the gluteal muscle and isolation of the vascular pedicle between the fibres, (c, e) the flap consisting out of skin, fat and the supplying gluteal blood vessels connected to the internal mammary vessels, (d) result following delayed reconstruction after a modified radical mastectomy, (f) the donor site scar.

Fig. 5: Pre-(a, e)) and postoperative (b, c, d, f) pictures of a 47-year-old woman who had previously undergone a breast reduction and abdominal wall liposuction before developing a right breast cancer. A skin-sparing mastectomy of the right breast combined with immediate reconstruction using an SGAP flap. A nipple reconstruction and left breast reduction were performed at a second procedure to improve symmetry. Although the donor site scar on the buttock is clearly visible, it rarely produces a significant contour deformity.